Ischemic heart disease (IHD) is commonly recognized as the consequence of coronary atherosclerosis and obstructive coronary artery disease (CAD). However, a significant number of patients may present angina or myocardial infarction even in the absence of any significant coronary artery stenosis and impairment of the coronary microcirculation has been increasingly implicated as a relevant cause of IHD. The term “coronary microvascular dysfunction” (CMD) encompasses several pathogenic mechanisms resulting in functional and/or structural changes in the coronary microcirculation and determining angina and myocardial ischemia in patients with angina without obstructive CAD (“primary” microvascular angina), as well as in several other conditions, including obstructive CAD, cardiomyopathies, Takotsubo syndrome and heart failure, especially the phenotype with preserved ejection fraction. The pathogenesis of CMD is complex and involves the combination of functional and structural alterations leading to impaired coronary blood flow and resulting in myocardial ischemia. In the absence of therapies specifically targeting CMD, attention has been focused on the role of modifiable risk factors. Here, we provide updated evidence regarding the pathophysiological mechanisms underlying CMD, with a particular focus on the role of cardiovascular risk factors and comorbidities. Moreover, we discuss the specific pathogenic mechanisms of CMD across the different cardiovascular diseases, aiming to pave the way for further research and the development of novel strategies for a precision medicine approach. 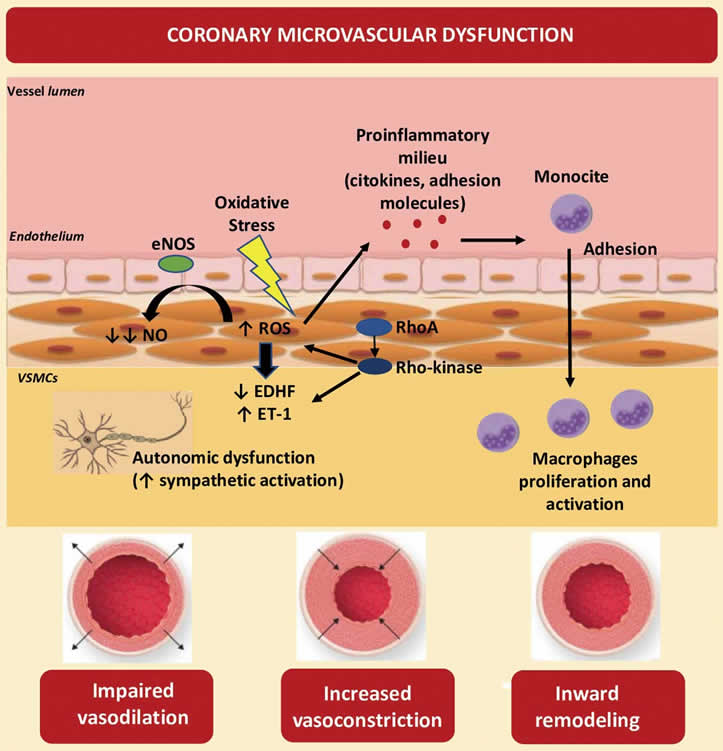 Ischemic heart disease (IHD) is still a leading cause of disability and death worldwide, presenting as acute (ACS) and chronic coronary syndromes. Coronary atherosclerosis is a major cause of IHD and, in the past years, most efforts have been made mainly towards the identification and treatment of obstructive coronary artery disease (CAD) (defined as any coronary artery stenosis >50%), with IHD and obstructive CAD often used as synonymous or interchangeable terms.

However, a significant number of patients presenting with angina or myocardial ischemia do not have obstructive CAD. Emerging evidence suggests that mechanisms other than coronary atherosclerosis may determine angina and myocardial ischemia in these patients and, in particular, that impairment of the coronary microcirculation may be involved, with its role being increasingly recognized in recent years.

The purpose of this review is to provide updated evidence in the current understanding of the pathophysiological mechanisms of CMD, focusing on the relevance of cardiovascular risk factors and comorbid conditions as well as its mechanistic and prognostic role across the spectrum of cardiovascular diseases.