1. What is new in the Universal Definition of Myocardial Infarction? 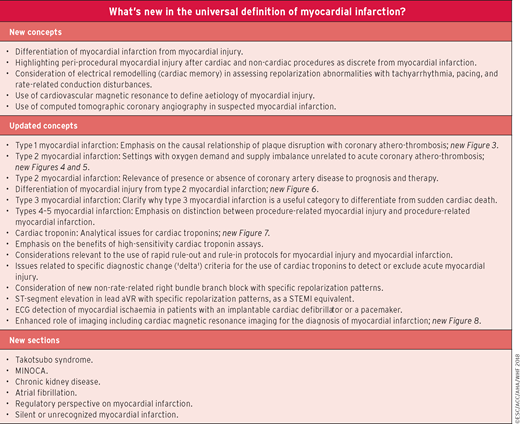 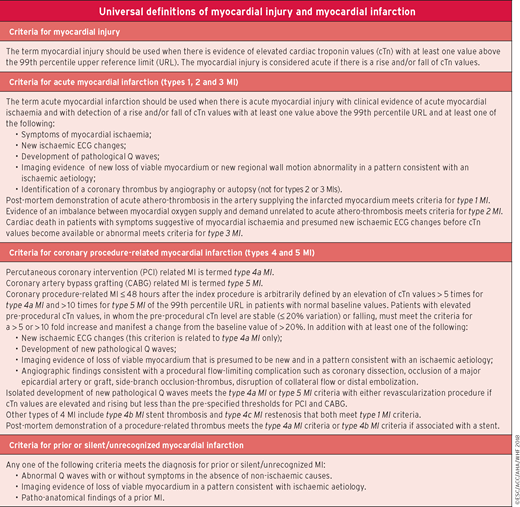 In the late 19th century, post-mortem examinations demonstrated a possible relationship between thrombotic occlusion of a coronary artery and myocardial infarction (MI). However, it was not until the beginning of the 20th century that the first clinical descriptions appeared describing a connection between the formation of a thrombus in a coronary artery and its associated clinical features. Despite these landmark observations, considerable time elapsed before general clinical acceptance of this entity was achieved, in part due to one autopsy study that showed no thrombi in the coronary arteries of 31% of deceased patients with an MI. The clinical entity was referred to as coronary thrombosis, although use of the term ‘MI’ ultimately prevailed. Over the years, several different definitions of MI have been used, leading to controversy and confusion. Hence, a general and worldwide definition for MI was needed. This occurred for the first time in the 1950–70s, when working groups from the World Health Organization (WHO) established a primarily electrocardiographic (ECG)-based definition of MI intended for epidemiological use. The original description, with minor modifications, is still used in epidemiological surveys (Figure 1). 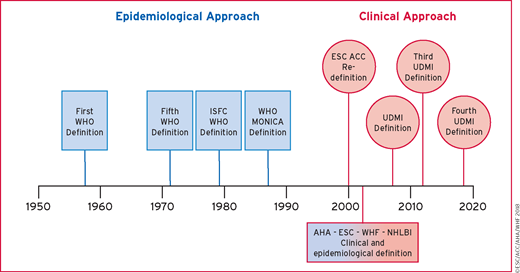 With the introduction of more sensitive cardiac biomarkers, the European Society of Cardiology (ESC) and the American College of Cardiology (ACC) collaborated to redefine MI using a biochemical and clinical approach, and reported that myocardial injury detected by abnormal biomarkers in the setting of acute myocardial ischaemia should be labelled as MI. The principle was further refined by the Global MI Task Force, leading to the Universal Definition of Myocardial Infarction Consensus Document in 2007, introducing a novel MI classification system with five subcategories. This document, endorsed by the ESC, the ACC), the American Heart Association (AHA), and the World Heart Federation (WHF), was adopted by the WHO. The development of even more sensitive assays for markers of myocardial injury made further revision of the document necessary, particularly for patients who undergo coronary procedures or cardiac surgery. As a result, the Joint ESC/ACC/AHA/WHF Task Force produced the Third Universal Definition of Myocardial Infarction Consensus Document in 2012.

Studies have shown that myocardial injury, defined by an elevated cardiac troponin (cTn) value, is frequently encountered clinically and is associated with an adverse prognosis. Although myocardial injury is a prerequisite for the diagnosis of MI, it is also an entity in itself. To establish a diagnosis of MI, criteria in addition to abnormal biomarkers are required. Non-ischaemic myocardial injury may arise secondary to many cardiac conditions such as myocarditis, or may be associated with non-cardiac conditions such as renal failure. Therefore, for patients with increased cTn values, clinicians must distinguish whether patients have suffered a non-ischaemic myocardial injury or one of the MI subtypes. If there is no evidence to support the presence of myocardial ischaemia, a diagnosis of myocardial injury should be made. This diagnosis can be changed if subsequent evaluation indicates criteria for MI. The current Fourth Universal Definition of Myocardial Infarction Consensus Document reflects these considerations through adhering to the clinical approach of the definition of MI.