Patients with angina pectoris, the cardinal symptom of myocardial ischaemia, yet without significant flow-limiting epicardial artery stenosis represent a diagnostic and therapeutic challenge. Coronary artery spasm (CAS) is an established cause for anginal chest pain in patients with angiographically unobstructed coronary arteries. CAS may occur at the epicardial level and/or in the microvasculature. Although the underlying pathophysiological mechanisms of CAS are still largely unclear, endothelial dysfunction and vascular smooth muscle cell (VSMC) hyperreactivity seem to be involved as major players, although their contribution to induce CAS is still seen as controversial. This article will look at the role and possible mechanistic interplay between an impaired endothelial and VSMC function in the pathogenesis of CAS.

Coronary artery spasm (CAS) is an established cause for anginal chest pain, the cardinal symptom of myocardial ischaemia, in patients with angiographically unobstructed coronary arteries. Evidence from large clinical studies has revealed that about 50% of patients undergoing diagnostic coronary angiography for suspected coronary artery disease (CAD) had either normal or near normal coronary arteries (<20% stenosis) or non-obstructive CAD (<50% stenosis). Abnormal coronary vasomotion occurred in about 60% of patients with unobstructed coronary arteries who underwent acetylcholine (ACh) provocation testing during coronary angiography, an established method for the assessment of CAS. These functional vasoconstrictor disorders may occur at the epicardial level, known as focal or diffuse pronounced epicardial spasm, and/or in the microvasculature, known as microvascular spasm.

An overview of the current diagnostic criteria of CAS is shown in Table 1. Due to the heterogeneous clinical presentation of these patients regarding rest- and/or exercise-related angina, severity and frequency of symptoms, presence of coronary atherosclerosis, spasm localisation, the diagnosis and treatment of CAS are still challenging. The lack of a consistent definition of epicardial spasm in previous studies, for example regarding the degree of vasoconstriction for a positive CAS provocation test, further impedes the understanding of the underlying pathophysiological mechanisms. Nevertheless, several mechanisms have been proposed based on experimental and clinical studies. Central players involved in all scenarios are endothelial cells and vascular smooth muscle cells (VSMC), which can be influenced by extrinsic factors such as oxidative stress and inflammation (often induced by established cardiovascular risk factors, such as hypertension, hypercholesterinaemia, diabetes, obesity and smoking), as well as genetic mutations/polymorphisms and the autonomic nervous system (Figure 1). The interplay of both the endothelium and the VSMC layer plays a crucial role in the regulation of coronary vascular tone and two schools of thought exist that see either endothelial dysfunction or VSMC hyperreactivity as primary contributors to CAS. The aim of this article is to summarise the current knowledge and possible interplay of an impaired endothelial and VSMC function in the pathogenesis of CAS.

Under physiological conditions, the interplay between the endothelium and the VSMC layer is crucial for adequate regulation of coronary vascular tone. Both cell types are influenced by various stimuli derived from haemodynamic (e.g. blood pressure and blood flow) and metabolic (e.g. adenosine and oxygen partial pressure) changes, as well as by the autonomic innervation and circulating vasoactive substances ,such as ACh, adenosine, serotonin and histamine, acting differently on the endothelium and VSMCs. The endothelium is much more than a passive barrier between blood and the vessel wall. By acting as signal transducers of haemodynamic forces (caused by the blood flow) and circulating substances, endothelial cells contribute to coronary tone modulation. In response to these vasoactive stimuli, endothelial cells are capable of synthesising and releasing a variety of autacoids with vasodilating properties, such as nitric oxide (NO), prostacyclin (PGI2) and endothelium-derived hyperpolarising factor (EDHF), but also with vasoconstricting potential, such as endothelin-1. Corresponding to the physiological situation and vasodilating/ vasoconstricting properties of these endothelial-derived substances, VSMCs respond with changes to their contractile state. Simultaneously, circulating vasoactive substances may also lead to vasoconstriction through direct VSMC activation. In normal coronary vasomotor function, providing an intact endothelial integrity and adequate VSMC reactivity, the net effect of these set of conditions favours vasodilation. 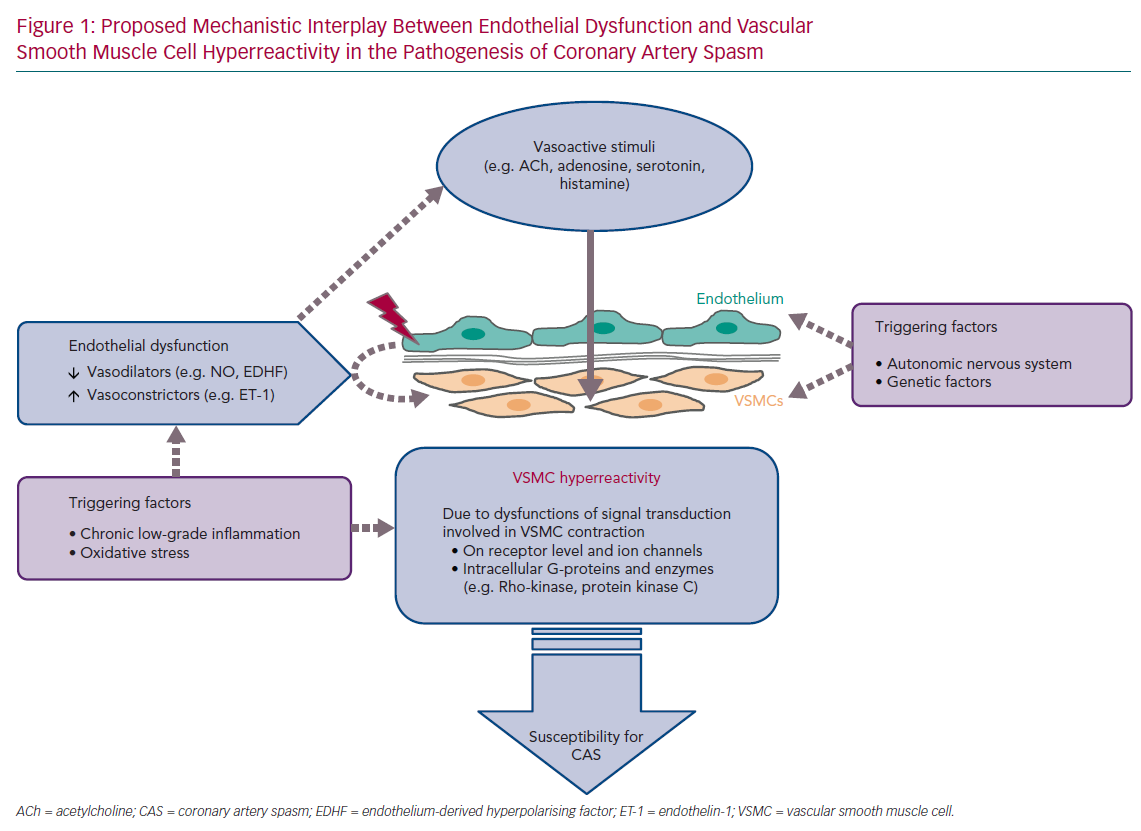 In the presence of impaired endothelial function and/or VSMC hyperreactivity, the net effect of circulating vasoactive substances can be vasoconstriction and this could favour CAS. In 1980, Furchgott and Zawadzki demonstrated in isolated rabbit thoracic aortas that relaxation of arterial VSMCs in response to ACh requires the presence of endothelial cells and that the complete loss of endothelial cells by rubbing off the intimal surface or intraluminal exposure to collagenase resulted in the complete loss of vasorelaxation in response to ACh.

The link between the increased vasoconstricting potential of coronary arteries in response to ACh and susceptibility to CAS was confirmed by clinical trials. Shimizu et al. observed vasoconstriction >50% in response to intracoronary ACh infusion in all examined patients with vasospastic angina without epicardial stenosis, while healthy controls showed neither ischaemic ECG changes nor vasoconstriction >50% during ACh provocation testing. In most asymptomatic controls, only mild vasoconstriction (0–25%) or even vasodilation was observed. Vasodilation in response to ACh was more frequent in relatively young controls indicating that age-related physiological impairment of endothelial function may favour the vasoconstrictive potential of the coronary vasculature despite angiographically unobstructed coronary arteries. This observation was confirmed by Okumura et al. who also saw a predominantly vasodilatory effect of ACh in young control subjects, whereas patients with CAS showed a significantly and diffusely enhanced vasoconstrictor response to ACh. However, these observations do not tell us whether the observed constricting effect of ACh is mainly mediated via a dysfunctional or even absent endothelium or an increased sensitivity of VSMC.