Vasospastic angina (VSA) is a variant form of angina pectoris, in which angina occurs at rest, with transient electrocardiogram modifications and preserved exercise capacity. VSA can be involved in many clinical scenarios, such as stable angina, sudden cardiac death, acute coronary syndrome, arrhythmia or syncope. Coronary vasospasm is a heterogeneous phenomenon that can occur in patients with or without coronary atherosclerosis, can be focal or diffuse, and can affect epicardial or microvasculature coronary arteries. This disease remains underdiagnosed, and provocative tests are rarely performed. VSA diagnosis involves three considerations: classical clinical manifestations of VSA; documentation of myocardial ischaemia during spontaneous episodes; and demonstration of coronary artery spasm. The gold standard diagnostic approach uses invasive coronary angiography to directly image coronary spasm using acetylcholine, ergonovine or methylergonovine as the provocative stimulus. Lifestyle changes, avoidance of vasospastic agents and pharmacotherapy, such as calcium channel blockers, nitrates, statins, aspirin, alpha1-adrenergic receptor antagonists, rho-kinase inhibitors or nicorandil, could be proposed to patients with VSA. This review discusses the pathophysiology, clinical spectrum and management of VSA for clinicians, as well as diagnostic criteria and the provocative tests available for use by interventional cardiologists.

Vasospastic angina (VSA) was first described by Prinzmetal et al. as a variant form of angina pectoris, in which angina occurs at rest, with transient ST-segment elevation on the electrocardiogram and preserved exercise capacity. The development of ambulatory electrocardiographic monitoring and coronary arteriography revealed it to be caused by coronary artery spasm. Coronary spasm is a heterogeneous phenomenon that can occur in patients with or without coronary atherosclerosis, can be focal or diffuse, sometimes with changing patterns in the same patient, and can affect epicardial or microvasculature coronary arteries. Although not uncommon, and involved in many clinical scenarios, such as stable angina, sudden cardiac death, acute coronary syndrome, arrhythmia or syncope, VSA remains underdiagnosed, and provocative tests are rarely performed. Recently, the European Society of Cardiology (ESC) guidelines on ST-elevation myocardial infarction emphasized the importance of myocardial infarction with non-obstructive coronary arteries, encouraging the treating physician to investigate underlying causes, such as VSA. This review will discuss the theoretical and clinical aspects of VSA for clinicians, in terms of pathophysiology, clinical spectrum and management, as well as the practical aspects, in terms of the provocative tests available for use by interventional cardiologists.

The incidence of VSA is unknown and highly dependent upon the population being studied, with important variations between Eastern and Western countries. Indeed, the prevalence of VSA seems to be higher in the Japanese than in the white population. The prevalence rate may also vary depending on the eagerness of the practician to investigate VSA, and on the provocative tests, which may differ from one catheterization laboratory to another. Nevertheless, coronary spasm is more frequent than one might think, and may still be underdiagnosed. In a study evaluating the prevalence of epicardial and microvascular coronary spasm in patients with anginal symptoms, despite angiographically normal coronary arteries, coronary spasm was present in 62% of patients: 45% with epicardial spasm and 55% with microvascular spasm. Indeed, in a recent Italian study by Montone et al., which evaluated patients with a diagnosis of myocardial infarction with non-obstructive coronary arteries, excluding patients with aetiologies other than suspected coronary vasomotor abnormalities, the provocative test was positive in 46.2% of patients. Using the same design, a multicentre Japanese study evaluated coronary spasm prevalence in patients with non–ST-segment elevation acute coronary syndrome. Of 1601 patients, 72% had a culprit lesion; among the remaining patients, the acetylcholine provocation test was performed in 221 patients, and was positive in 175 (79.2%) patients. Therefore, the prevalence of VSA in different populations still needs to be better defined but such pathology should not be ignored.

Coronary arteries can adapt the blood supply during different loading conditions by either vasoconstriction or vasodilation. In patients with VSA, an abnormal vasoconstrictive response can occur. Although the pathogenesis of coronary artery spasm has not been fully elucidated, different pathogenic mechanisms have been proposed, such as vascular smooth muscle cell hyperreactivity, endothelial dysfunction, magnesium deficiency, low-grade inflammation, altered autonomic nervous system response and oxidative stress – variables that could be modified by genetic factors (Fig. 1). 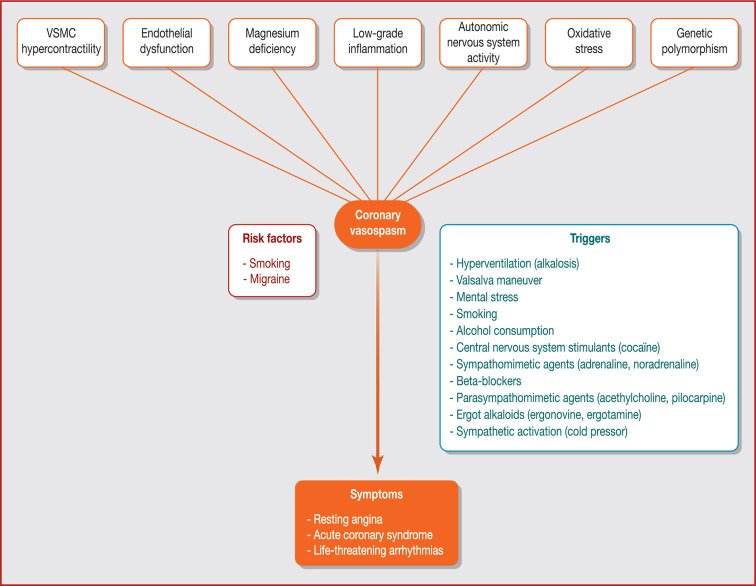 Vascular smooth muscle cell (VSMC) hyperreactivity is thought to be one of the main substrates for spasm. The contraction and relaxation of VSMCs are regulated by myosin light chain (MLC) kinase and MLC phosphatase via phosphorylation and dephosphorylation of the MLC. The small guanosine triphosphatase RhoA and its downstream effector (Rho-kinase) are involved in the regulation of VSMC contractility and may play a crucial role in the pathogenesis of coronary artery spasm. Rho-kinase inhibits MLC phosphatase, leading to augmentation of MLC phosphorylation and calcium sensitization in response to vasoconstrictor stimuli. Rho-kinase is upregulated at the spastic site, and plays a key role in inducing VSMC hypercontraction by inhibiting MLC phosphatase. Growing evidence indicates that Rho-kinase has important roles in the pathogenesis of a large range of cardiovascular diseases. Indeed, the RhoA/Rho-kinase pathway not only mediates VSMC hypercontraction through inhibition of MLC phosphatase, but also promotes cardiovascular diseases by enhancing the production of reactive oxygen species. Coronary spasm may therefore be regarded as hypercontraction of coronary smooth muscle triggered by an increase of intracellular calcium. As calcium channel blockers (CCBs) block the entry of calcium into cells, it explains their effectiveness in suppressing coronary spasm.

The endothelium plays a key role in the regulation of coronary vascular tone, predominantly through its ability to release several vasodilator substances, named collectively as endothelium-derived relaxing factors, including vasodilator prostaglandins, nitric oxide (NO) and endothelium-derived hyperpolarizing factor. Endothelial dysfunction was thought to play an important role in coronary spasm. However, these results were challenged by a porcine model of spasm, indicating that endothelial vasodilator function was preserved at the spastic site; this remains to be elucidated. Nevertheless, endothelial dysfunction with decreased NO release and reduced bioavailability combined with VSMC hyperreactivity may be an important factor in developing coronary spasm. However, endothelial dysfunction alone might not be sufficient to explain VSA.

Magnesium deficiency has also been considered as a possible factor contributing to coronary spasm; it has a blocking effect on calcium channels and may prevent the contraction of vascular smooth muscle. Indeed, magnesium deficiency has been reported in a large proportion of patients with variant angina, and magnesium infusion has been proposed to reduce spasm attacks in patients with VSA.

Autonomic nervous system activity may play a role in the development of spasm in patients with VSA. Enhanced sympathetic nervous activity at night may be involved in the mechanism underlying multivessel coronary spasm. Yasue et al. also reported that enhanced activity of the parasympathetic nervous system, which occurs at rest, could be involved in the initiation of the attacks, by stimulating the sympathetic nerve and activating alpha receptors in the large coronary arteries, which could, in turn, induce coronary spasm. Other studies reported that sympathovagal imbalance may play a role in nocturnal VSA.

Oxygen free radicals damage vascular endothelial cells and degrade NO, leading to vasoconstriction. Biomarkers for oxidative stress are increased and antioxidants (such as vitamin E) are decreased in patients with VSA. Moreover, cigarette smoking, which is highly associated with VSA, has also been shown to increase oxidative stress and to degrade NO.

Multiple genetic polymorphisms could potentially be involved in the predisposition for coronary spasm. Most of these mutations concern the gene encoding for NO synthase, but mutations in other molecules responsible for modulation of vascular tone have also been suggested.

The typical presentation of VSA is nitrate-responsive rest angina, especially at night or in the early morning. Chest pain is similar to effort angina, but is often more severe and prolonged, accompanied by cold sweat, nausea and sometimes syncope. The other characteristics of VSA may include precipitation by hyperventilation (but not usually exertion), a circadian pattern, preserved exercise tolerance and typically suppression by CCBs (and fast-acting nitrates). Nevertheless, there is a great variability of symptoms. When the vasospasm lasts long enough, it can result in angina or even myocardial infarction, life-threatening arrhythmia, atrioventricular block and sometimes sudden death.

Smoking has been reported as the most important predisposing risk factor for VSA. Previous reports have suggested that VSA could also be associated with Raynaud’s phenomenon and migraine, as part of a generalized vasomotor disorder. However, while VSA seems to have a strong association with migraine, its association with Raynaud’s phenomenon is less clear. Ethnic differences also exist as a predisposing factor, with increased prevalence in Asian populations.

In addition to risk factors, some elements may contribute to the onset of coronary spasm, such as hyperventilation, Valsalva manoeuvre, mental stress, magnesium deficiency, alcohol consumption, cocaine, or the use of pharmacological molecules such as sympathomimetic agents (adrenaline, noradrenaline), beta-blockers, parasympathomimetic agents and ergot alkaloids (ergonovine, ergotamine, etc.).